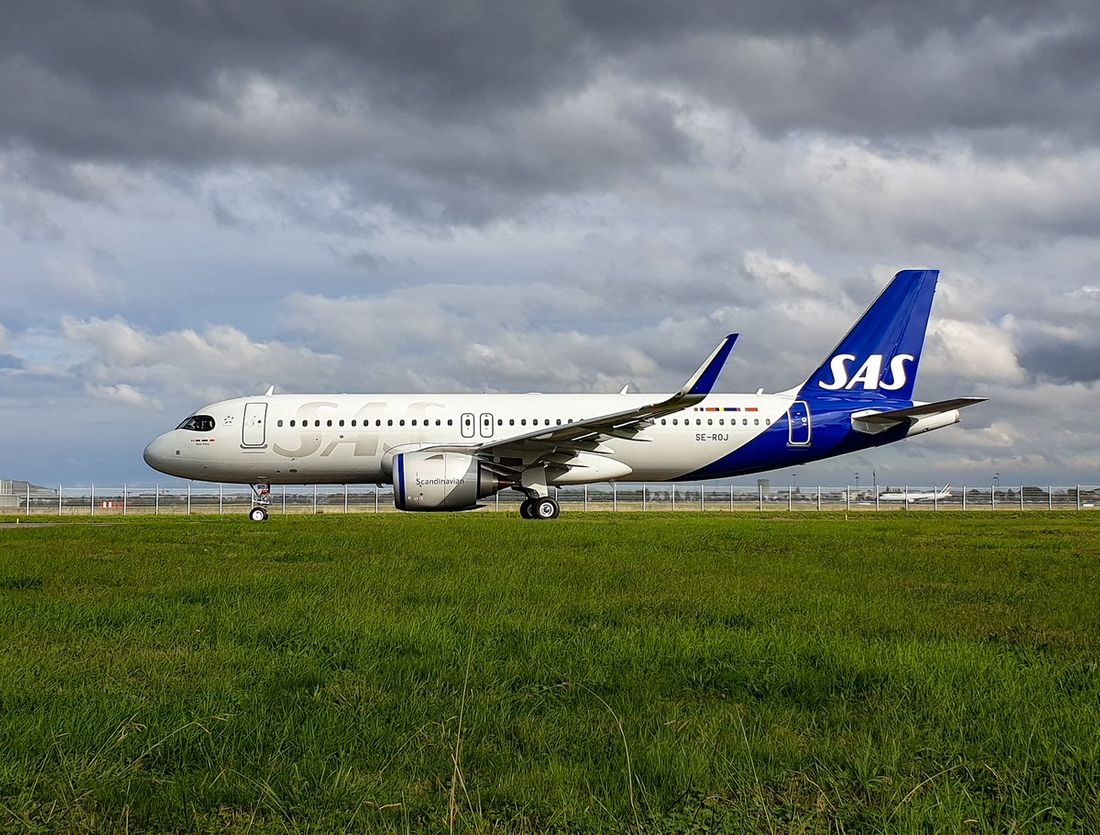 Sas said I could cancel my flight and get half my money refunded. I said ok and then they cancelled my flight and gave me no money back. A new low...

Disgraceful from start to finish. Covid 19 excuse used extensively to avoid any form of service. As a 'Plus Passenger' I was downgraded (in terms of service) to less than coach/economy. Boarded last. Front toilet out of bounds to mere passengers, and only reserved for the crew. So only 2 rear toilets for all the passengers! No food or drinks given. No lounge. No fast track for security. And to top it all, passengers were informed that they must bring all rubbish forward for disposal. No collection by the crew would be made! So to sum up all you get for your extra payment is to sit at the sharp end of the plane. Therefore, I recommend; do not pay any extra for plus, it's not worth it.

A most disappointing flight and not worth the price paid! As a plus passenger, I would have expected to receive a bit of service. There was absolutly none. No bottled water no crisps or other snacks. It was made clear (before the date of traveling) that there would be no fast track and no access to the SAS lounge. What wasn't explained until we were being boarded was that plus passengers were to be boarded last. On boarding we were all handed a sealed hand wipe. And after the safety demonstrations, we were told that only the aft lavatories (2) would be available for the passengers. Thus meaning that the crew (6) would have the exclusive use of the forward lavatory. I am still puzzled by why those of us in the forward part of the plane were all right to walk past the first boarded passengers, when they so very obviously had to be protected from us? SAS has really let themselves and their passengers down by this very obvious cost-cutting exercise.

Our trip to Prague was cancelled April 20, 2020. Today August 7, 2020 only one ticket has been refunded. They are sitting with over $2000.00 of our money. We’ve called and we’ve been patient - every time we call and wait on hold forever , we are told we are in the queue for a refund. Will never fly this airline. What a mess

Don't travel with this company ! It's impossible to contact us and after they cancelled our fly they don't want to refund your account. This is the worst flight company ever !

😡😡😡 3 to 4 months delay to get a refund, it's a shame !!! We want our money back immediately !!! Here is the reference of our file: SJHXSL We will contact a consumer association if the refund is not made this week. Please make the necessary arrangements.

Walking from the departure lounge to our aircraft, some people carried off down the wrong corridor for a bit. Our route wasn't marked clearly enough (attention to detail by staff was lacking at the first stage). On board this prop aircraft they were having a broken light problem in the cockpit. Everything switched off, including the ventilation, which with many passengers onboard got fairly hot and unhealthy quickly! After many minutes and the problem solved by the engineer, we were off, leaving a rainy Bergen for sunny Aberdeen. A pleasant and quick flight, but still arrived over 30 minutes late.

Checking in our luggage/security at Oslo was good, or so we thought. What should've happened at check in was that the member of staff should've explained that our luggage would be transferred onto our next flight to Aberdeen! Nothing during the whole return flight process informed us of such a fact. Everything being an automated, apart from checking in our luggage. When we'd flown from Aberdeen to Stavanger we had to reclaim our luggage for our next connection to Oslo. Therefore, standing waiting, at the Bergen luggage reclaim, not seeing our bags, with time running out, was not an enjoyable experience. Thankfully my wife had chased down a member of staff to find out what was going on? We made our flight by 5 minutes!

Due to covid and the lockdown, I could not make my Easter flight to Norway. Instead of refunding my ticket, SAS forced a voucher on me that has yet to materialize. I have called twice, waiting up to an hour that I was obviously charged for, just to have a rude assistant tell me it has been sent and it will be sent again, but I have received nothing. It has been over 3 months. I sent a complaint to SAS that they closed stating everything was done right and my complaint resolved, when nothing has been resolved. I will never use them again, despicable tactics.

Flights were cancelled 3 times starting from may. Still no money refund. Not recommended to use their flights.

Our flight was cancelled in March we are also still waiting for a refund but no one been in touch keep saying it’s still on going !!!!so frustrating but can’t seem to find an email that works !!!would never book again with this airline who are also breaking the law

No choice of meals, no kid's meal (even though we pre-ordered it), snacks were offered ... for an extra fee. One meal was so bad it was inedible, some polar flat bread with vegan-lactose-free cheese, our 6-year-old daughter literally cried when she bit into it! She was so hungry we had to pay for a snack to calm her down. Disgraceful. The entertainment system was broken! No in-seat entertainment on a 9 HOUR flight! On a half-empty plane, during a pandemic, they scheduled all our seats lumped together instead of spaced out! The worst part was during the flight home, the attendant allowed a man to take his dog out of it's kennel and let it lay across the seats, no leash, unattended while he would go to the restroom. It was a fairly cam dog, but come on! People have allergies! Now there is dog hair all over the seat. This was NOT a service dog, just a pet. SAS used to be a fairly good airline, but their stripping back to basics does not make for a comfy flight for people flying with children.

Bodø to Tromsø. Terrible and awful personnel service. One of the staff was so mean and rude to me. Worst experience I’ve had with any airline. She did not seem to care at all, and showed no sign of wanting to help

SAS cancelled our flights the end of May. Waiting patiently for the refund, I started to look at TripAdvisor and FB if I was the only one. People still have not received refunds that had their flights cancelled in March. I would put a high probability of bankruptcy in their future. The only way to protect yourself is to pay with a credit card within 60 days of your scheduled departure to protect your chargeback rights. It'll be a miracle to get my $3,000 back.

Changing flights all the time and now 3 within an hour from Chania to Copenhagen. Changing flight times all the time and changing seats just before boarding. Politeness course for the purser not included when entering. In general this is an ok or even more than ok airline, but when bad it's really terrible. And when everything went smooth they ask you to for an evaluation after the flight. When they fail that mail is never in your mailbox. By the way, ground service at Chania airport, including WCHS were well organised, but that's done by other companies.

Our transition at Stavanger from Aberdeen to Oslo was fairly smooth. The issue/problem was, that coming from Aberdeen we had an opportunity to visit duty free at Stavanger (as Aberdeen's duty free was closed). My wife bought a bottle of whisky here, she questioned/asked if the bottle should be placed in a duty free bag, with the staff's answer of "no need". We carried on and reclaimed our luggage, then exited arrivals to check in again. Helpful staff at Stavanger check in, explaining all requirements patiently, before we headed through security. This was where we encountered the problem. At security they said we couldn't continue with the bottle of whisky. My wife explained what had happened and security staff took us all the way back to duty free to place the bottle in a plastic official bag! Mmmmmmmm! At least security staff used common sense. Once through security everything with the SAS flight was smooth towards Oslo.

We have a flight booked for a trip to Denmark in August, however, the border is closed to U.S. citizens. As the story goes, they will only refund us for a very small fraction of the $5k we spent for our truckers. $600 to be exact in the form of a travel voucher. How is this legal to essentially steal our money? Our flight has not been officially canceled yet, but based on other testimonials I am not very hopeful that we will ever see a refund. Avoid SAS at all costs and we are personally not planning any trip to Scandinavia until they address their airlines dishonesty. I hope there will be a class action lawsuit.

Easy check in and boarding. We have to stop at Stavanger to get to Oslo. An expensive all round trip for 2 (£870). My concern was, once on the aircraft, with everyone wearing their face masks because of COVID-19, to find minimal passengers on board, they grouped us all together in the centre of the aircraft! Ludicrous! They should have spread us out once all passengers on board were confirmed. We got off at Stavanger, went to baggage reclaim, picked up our luggage, exited, then approached check in / security again to board another SAS aircraft for Oslo. There were more passengers on this flight.

SAS Poor service, rude crew, and sell costly service that do not exist. My wife bought a business class one way flight from Malaga to Helsinki for me as a surprise. Indeed, surprised i was when there were no priority lane and and I was seated at 14A with a bottle of water on my seat. I then approached a stewardess explaining I was booked on business class and expected food. I am diabetic and did not have breakfast expecting there is one. The rude stewardess answered there is no business in this flight and no food and told me if you are diabetic take your medicine. Seriously, I said diabetic don't need medicine when your blood sugar is low you need food. To make the story short upon arrival I immediately tried to contact SAS no answer, I filed a complaint, no answer. Tried calling almost everyday for 3 months and finally two weeks ago got through I demand that they return the difference from the Business class amount which I and my wife paid for, less the Economy service I received. I told them why was I not informed that there was no business class service on the flight I could have cancelled. They only answered due to covid there was a change in their service. And that's all the answer I received. Why sell service that's not available? I don't want anything special they can charge me the economy service I received and return the rest. Not recommending to anyone.

Hates Scandinavian culture, and pretands that there is nothing special about it. I mean how low can a company become