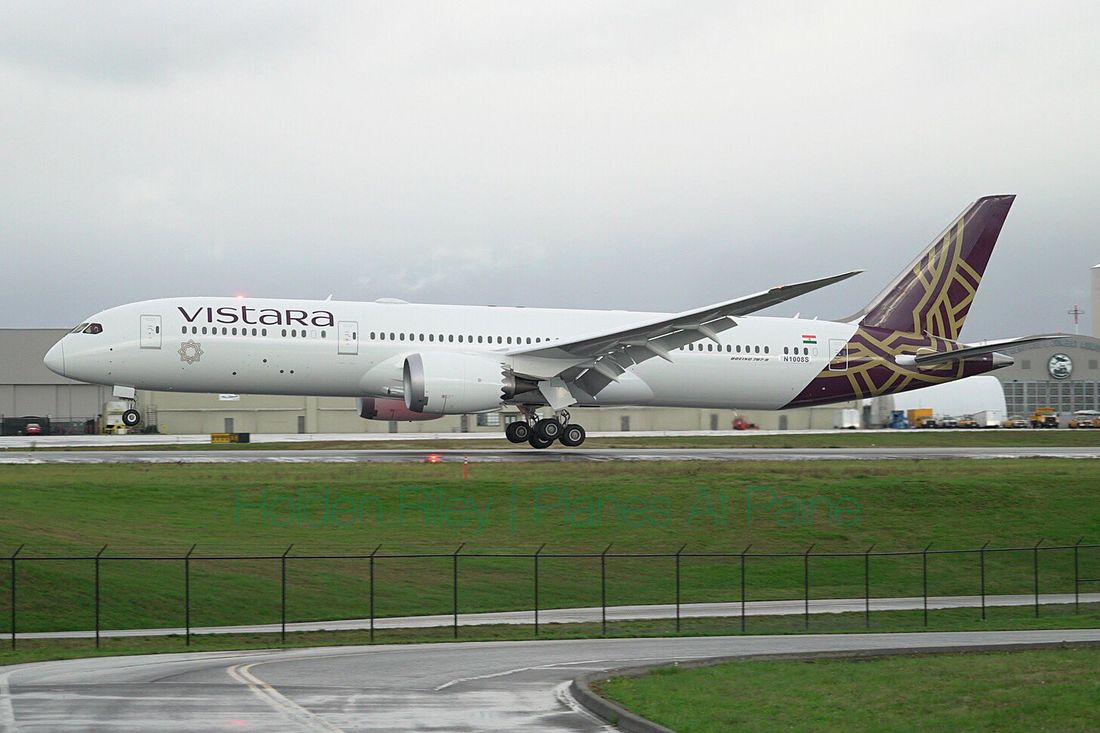 This airline takes booking and then cancels at the last moment leaving the passengers to make their arrangements. I had a connection from Delhi to Newark. Vistara has partnered with United Airlines for this connection. Canceling my Ranchi to Delhi flight at the last moment left me to do too many things in too little time. I will avoid Vistara in future.

I am student and traveling during pandemic time (covid-19) I was vacating my hostel and had only 5 kg of excess luggage but this airline charged me of rs. 8050 that they are not allowing the luggage to be kept in the cabin. Zero customer satisfaction and and can't help people even during this pandemic time. They are just opened for making money, worst airline and experience.

I had booked a ticket from Bangalore to Mumbai on 22nd June. Vistara customer service is worst. It provided wrong information regarding the extra baggage purchase and mede me pay extra money and buy it. After 2 days they cancelled the flight from their end and when contacted regarding the refund they refused to provide it blaming the whole situation on COVID. How can they rob passengers hard earned money and keep it by not providing any service. Their agent had called me saying at least the extra money i had paid for baggage will be refunded, but it was a lie, they did not respond when contacted and most of the time they pretend as if they do not understand the customers problem. They rob big amount from passengers for free like this taking advantage of the Covid situation.This was the first time i booked in this airline and will be last. I highly recommend not to book on this airline if you do not want to be cheated by them.

My traveling date was 2nd april 2020 because of lockdown.flight ticket was converted in voucher.Not refunding amount for my flight as they have given date till 31Dec 2020 to booked in open ticket. I want to booked ticket on 25 june to 12 july in between any of these day.The vistar flight is not available during 25june to 12july after that i called to customer care they are still saying you can booked ticket when flight is available..They mean to say i have to travel when vistar flight is available.Thats not fair if your flight is not available.What should i do.Totaly dissaoppinted.

Very bad... My tickets has been cancelled twice.. From next time I will never book this again... Please maintain it.. Very disappointed.

Was an overall good experience. Flight took off and landed on time. Enough leg space , comfortable seats. The crew was courteous too.

More than 45 days have elapsed and I have written so many emails to Vistara and Ease My Trip (EMT) through which flight booking was made but I am still waiting for my full refund against PNR-WTJ3JI for flight from Delhi to Ahmedabad dated March 18,2020. Gujrat government had shut down all institutions and travel places hence I had to cancel my trip as well as this flight. Vistara appellate authority has confirmed on the email for full refund but Ease My Trip says they have not received the refund. When I call Vistara cutomer care they say refund has been given to EMT but when I connect to EMT they say they have not recieved the refund, now who is lying in this case?? What should the customer do in such a case when both Vistara and EMT are not supporting and throwing ball in each other's court????

Guwahati to Delhi. My flight booked through Cheapoair for April 15th was canceled, Vistara could not provide the service I paid them for, and Cheapoair will not refund my money. It reflects poorly on your company.

The flights good. Space is better then indigo and on time.. the snacks offered are a bit average in terms of variety and can improve. The staff is mature, well trained and pleasant . Food was served on good time and was decent in quality

Me and my partner were recently in India. We booked a ticket with Vistara from Goa to Delhi in order to be able to take our repatriation flight back to Europe. The Indian Government cancelled all domestic and internationals flights, including our domestic Vistara flight from Goa to Delhi. We asked the airline to give us a full refund for the flight that was cancelled. The airline refunded us half of the money back for the flight, saying that they didn't cancelled the flight, that it was government decision and that's why they charged a fee for the refund, and we only got back half of the money we payed. It's sad that a company like Vistara is profiting from a flight that never took place and that it is not willing to give a full refund to its customers specially in this time of crisis. I will not book anymore flights with Vistara again.

In March 2020, I had the sudden opportunity to fly with Vistara with my entire family. For the rest of the members, it was their first time flying with them. It was a last-minute booking made at the airport. We had a really bad day since the morning and all of us (including the 2 kids) were under a lot of stress. But that started to change the moment we stood for checked in. Seeing that we were a large group, the customer service member immediately took us to a counter that had only 2 persons in front of us. The person who checked us in was very courteous and explained us each & every important details of the boarding pass as if we were flying for the first time (unbeknownst to him, it was in fact my 107th flight) :) He couldn't confirm whether meal is included in the ticket though. For that I called the customer service phone number and after almost no wait time got through a nice customer service representative who cleared our doubts promptly. The boarding commenced on time and it was done in a very smooth and orderly manner. Right at the door of the aircraft we were greeted by friendly cabin crew, who took special care in bringing smile to my little daughter. I was surprised to experience the fresh look and feel of the cabin. I, then, looked up the registration of the aircraft (VT-TNW) and found that we were about to fly in just a 3 months old aircraft :O The seat back was loaded with features to hold all possible items, the seats were comfortable and squeaky clean. We started the push back right on time and after we took off, the cabin crew started serving dinner with great efficiency. When I enquired about the menu choices, the extremely friendly cabin crew showed us the actual content, which we loved. Now my son hates rice and doesn’t eat that ever. But other than the small bread roll, the meal tray did not have much carbohydrate options left for him. He is a great fan of paneer though. But smelling the really nice aroma of the pilaf, which was in the same container with paneer curry, he could not resist himself. He started taking both pilaf and palak paneer curry with the spork! He liked it so much that he even finished another plateful of pilaf and rice!! I could not believe my own eyes! My daughter also liked the food but she was more interested in watching the movie Frozen in my phone, which I was streaming from the IFE. It played flawlessly during the entire duration of the flight. The cabin crew was one of the friendliest I’ve met in all the Indian carriers. They made eye contacts, smiled back when smiled at and took genuine care of the passengers. My apologies for not asking and noting down their names during the journey. The entire journey was extremely smooth and it helped us in releasing all the stresses that accumulated throughout the day. The plane stopped at the gate at CCU airport 2 minutes before time :) I was quite thrilled by getting such a world class service at economy class. My daughter, who is not a great fan of flying due to the ear pain that she gets during take-off and landing, even said that flying by Vistara was the top 3 memories of our 6-day trip. I know that right now you are going through very difficult times due to COVID-19. But know this - my family is eagerly waiting for you to start the Dreamliner service post COVID-19. We are hoping that you will be starting the service to one of the UK/European destinations. If the fares are close to the competitors, we’ll be surely trying to “fly the new feeling” in the Business Class of your brand new 787-9!

Kochi to Delhi. The Airline cancel our flight on 10th April and they don't give us our refund for tickets booked through BudgetAir. We need the refund because we are from Spain and we couldn't travel.

Vistara cancel our flight from Kochi yo Dehli without refund. We Contact with customer services but Vistara doesn't give us the refund

During our trip, we found the Vistara air crew diligent and elegant in their approach towards everyone on board. Even as they spoke to each other, I sensed a pleasant and respectful vibe, which is a basic humane etiquette. But unfortunately, this essential trait is found lesser and lesser in many other airlines. It was quite refreshing to find such compassion and kindness after years of travelling. Thumbs ups to the cabin crew of Vistara and please do keep up the better work. Thank you.

Hyderabad to Delhi. Vistara airline dont respond to mail and phone and I have tried to contact them by both mail and phone from last 5 days and every time I call the line will be busy and it is very important for me to address my problem to vistara airline due to this Corona issue. I am unable to travel to airport because all facilities are stopped in Hyderabad.

The flight was on time and the food was very good.neat and clean.this was my first travel with vistara.enjoyed it but the leg space is very less in the economy class.while travelling back from Port blair we had a premium economy ticket and enjoyed the luxury with excellent food and beverages and much more leg spaces.

I requested a gluten free meal as I’m a celiac and strictly on a wheat free diet. Initially the ground staff told me I had it in my profile whereas the crew said they had a GF meal but were not aware if it’s mine. Finally the meal came and it was made of soyabean(a wheat product ). I was aware so I could get it changed. Someone like my mom who is allergic as well can not spot the difference and would’ve suffered a reaction. The crew understood my problem and gave me an alternative but blunders like this can be fatal. I hope the airline is conscious about such mistakes and doesn’t repeat them.