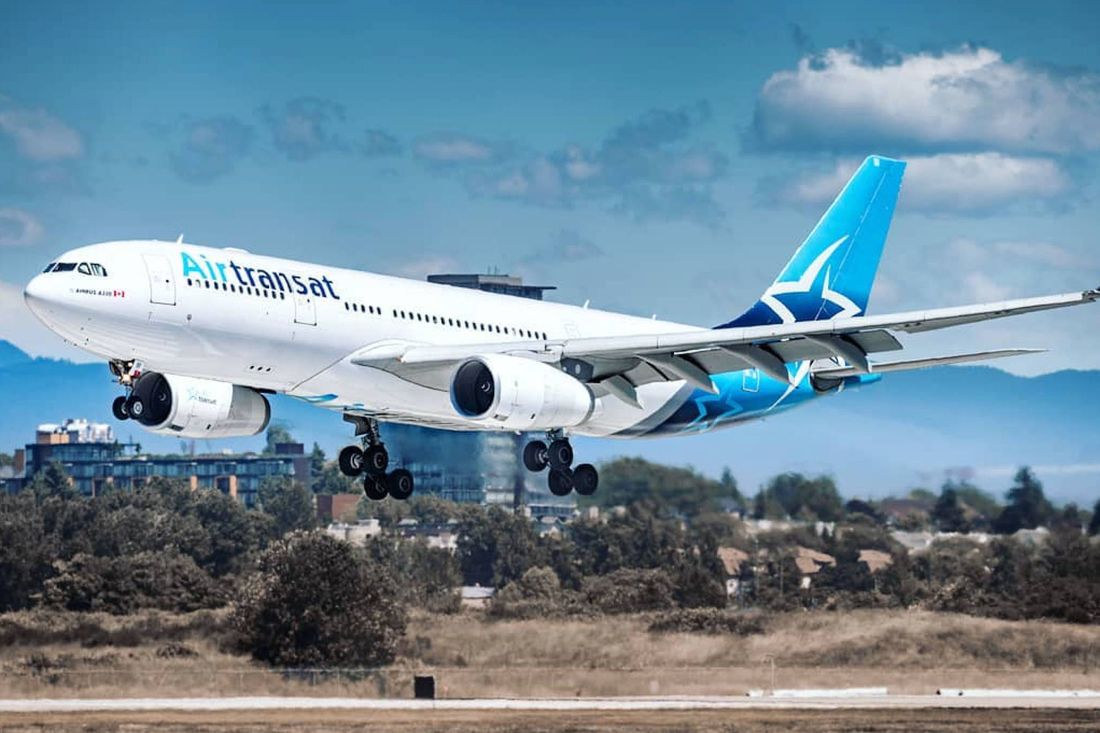 flights were booked and confirmed ,on the morning of travel (august 12)tried to check in online and the flight was removed from the schedule ,no email or text ,called the airline and after about 1 hour 30 mins on hold ,was told maybe tomorrow ,i I scrambled to find a flight on another airline which cost an additional $800 dollars per ticket .but was assured that the return flight (august 16) would be fine.It wasn't .that flight was also cancelled ,no text /email/or call,just frustration ,no one available at Vancouver airport ,tried calling many times and after many hours was told we were moved back one day as a stand by passenger .we did get on that flight , summary ,cost an additional 1600 dollars ,missed a day at work ,had to pay an extra day hotel,meals and car rental . p.s. a five hour flight and only a bottle of water.no food unless you pay extra .and no in flight entertainment except on your own device ,I assume an old plane.

Absolutely terrible, paid deposit in January of 2020 for November 2020 wedding , transat has now canclled flight but we wont get our deposit back until sometime in 2021 (if they are even still in business then!) So they cancelled the flights but will hold our money for over a year before refunding

I arrived in Athens at 10am.I was waiting for my luggage 1 hour and then they told me they lost it and should be there at 2pm.i left from the airport.At 3pm i call them and they told me the luggage will be in Athens at 2am.All day without cloths without nothing.i took a taxi to get there AT 2AM and then back.i paid 120euro i ask them to give me back the money taxi.however the email me back they not gonna give me nothing for the taxi.

It has been 3 months since I requested a refund because they cancelled a flight I booked from them last May 2020. They seemed to have baited travellers to book from them then cancelled it from the last moment. Now, the third party agent where I have booked the flight from have difficulty contacting their airlines for my refund. Terrible Airlines!

Previously, I would have recommended them and given a 5 star review but now I will never use their travel services again. I have been waiting for a refund for something since the beginning of MAY. Their customers service reps are snappy and refuse to even look into it or check on my specific case and just say "refunds take time" how the hell does a refund take MONTHS? It's AUGUST NOW. Now they have just cancelled my trip for April 2020 and will basically get around to the refund when they feel like it, so if the first refund hasnt been processed in 3 months, how long will this one take?? Meanwhile, I have lost hundreds of dollars in booked hotels and events I was suppose to use on that trip and I likely won't even be able to get an affordable flight out there at that time now thanks to this random cancelation. Yet they have the audacity to act like Im impatient lmao. Disgusting. Who knows if Ill ever see any of that money back with these guys. Great customer service, ripping people off during a pandemic. Wow.

I will NEVER use this airline again. On hold for hours and hours to try and speak to someone. Our flights have been cancelled for August, and they are refusing to refund them due to “company policy” despite them breaking the law by doing so. I’ve outlined the regulations on this as mentioned here - “mentioned in EC 261/2004 and in addition case law from the Canadian transport agency as well as contract law “it is unreasonable for porter to refuse to refund the fare paid by a passenger because of its cancellation of a flight, even if the cause is an event beyond porters control” They are still refusing to refund us. We’ve recorded all our phone calls and kept messenger messages, and we are now having to take legal action.

We will never fly transat again! Abysmal customer service. We will spend more with AirFrance or Lufthansa, forget these jokers.

booked flights to return back home from Europe for June 18th, they cancelled my trip and gave me a voucher which I used to pay (partially, because they added in fare difference) for a flight out to Calgary July 2nd. They ended up cancelling this flight as well and instead of me informing that my flight was cancelled, they simply sent me two vouchers.... This means that I needed to Call Air Transat (which took up 1.5hours of my day) and ask them what was going on with my flight. In the end, we had to file dispute with credit card company because Air Transat refuses to give our money back. horrible airline, throughout this process, they were extremely rude over the phone and when we tried to contact them via email, simply stating that what they were doing was okay because it was due to circumstances they had no control over. They literally just try to steal money in any way they can. Do not recommend this airline, save yourself the trouble and book somewhere else!!

Cancelled all our flights and refusing to refund, despite being required to by EU law. They don't answer the phone but then don't respond to messages left on the answer machine, don't reply to emails - even sent directly to the CEO. They ignore tweets and facebook messages and just continue to refuse refunds. Do not ever use them again as they have zero customer service

Please take note that this company does not care about its customers and takes your money and runs. Please check out the reviews and go with a company that cares for their customers even if they are a little more expensive. Air Transat do not deserve our custom.

Booked a flight with them as they seemed good and had awards for leisure flights. Was treating my parents to a trip to Canada but they cancelled the flight and are a NIGHTMARE to deal with now. They REFUSE to refund my although entitled by law, they say they will only offer a voucher. Please don't use this company. When things go wrong they have zero customer service!!

Although EU says that any airline who departs from or is destined to an EU airport and cancels a flight, for whatever reason, must refund the customer money. Air Transat is not doing this. Not only are they breaking the law, but they have terrible customer service. I wish I could give them -5 stars.

Bought tickets last year they canceled my flight and then refuse to refund me for thousands of $ worth of tickets. They don’t return calls and don’t care about you in these difficult times, just about their bank account. You learn more about companies in times of crises very sad.

I travel with Transat a lot and I am always happy with the service they provide. Not all planes with Transat on the international flight have the TVs but you can use the App if you can get it to work. I love flyig with Transat usually but the international flight was long without a TV and a power supply to charge devices. Option plus is a nice extra to include on the long flight as you have the blanket, pillow etc. I travelled on my own for this flight so sitting with others I would recommend either booking an Aisle seat so you have a bit of space of the extra legroom seats especially when travelling on your own since you try to keep in your own space and its a long flight.

Our flight was cancelled due to the corona virus, obviously this was outside the control of Air Transat. What isn't outside their control is the way it has been dealt with. The company have refused a refund which they have to give as per EC Regulation 261/2004. The professionalism of their staff has been shocking, they really do not care and some of the messages we have received have been almost mocking in tone. I have requested a chargeback through my bank who have been very helpful. Unfortunately Air Transat have denied this so my bank are still fighting for me.

last week I booked a flight from Montreal to Nice France, one day later airtransat cancelled the flight and they refuses to refund and ask me to rebook to another city LOL. That happened last week and they knew that this flight going to be cancelled but they left booking opened so they could trap travellers and push them to book with them so they airtransat could hold the money. This has nothing to do with Covid19 coz it happened last week!! Now I don't have the money to buy another ticket !!!!! even when I told airtransat that they said don't involve us with your personal issues.. really!!! They announced that they had flight from Montreal to Nice France , when I booked and paid for that they cancelled the flight and refused to refund me to buy another ticket from somewhere else!!!!! SHAME ON YOU AirTransat.

We had a flight booked in April'20 that was canceled without our notification. When we attempted to check-in online, we called to inquire and were informed that the flight would not be rescheduled, nor would we be offered a new flight. We requested that we be refunded the full cost of our flight due to the cancellation based on the Terms and Conditions and were told that new T&C were inacted after our booking that says Air Transat no longer has to give refunds. I explained that the only T&C legally applicable to our flights were the ones in force on the day that we booked. After explaining this to multiple representatives on multiple calls, they all still refused to issue a refund and now, they have essentially stolen our money. NEVER FLY WITH THIS AIRLINE. THEY ARE THIEVES AND WILL STEAL YOUR MONEY, THEN TREAT YOU LIKE TRASH!! STAY AWAY!!!!

They managed to trick their customers out of a refund and ignore phone calls and messages. I managed to get through to them and I spoke to the rudest person on the phone. WORSE AIRLINE EVER

Avoid Air Transat at all costs!! A bunch of crooks and liars! After cancelling their flights across the board in July 2020, Air Transat has refused to refund your paying customers for flights, which is utterly reprehensible. This was the first time I used Transat and I am very disappointed. They lied to their customers and conveniently changed their T&C to try to continue cheating them out their rightful choice to refunds! Other low cost companies are refunding (e. g. Norwegian, Ryan Aor, etc. ) and their decision not do do so just shows selfishness and lack of flexibility towards their paying clients on the part of your organisation; saying it’s company policy is not enough to whom you owe service! We are not here to support Air Transat through the Covid crisis, as we have our own losses to shoulder. Air Transat has systematically refused to answer customer service calls and emails. I will NEVER fly with them.